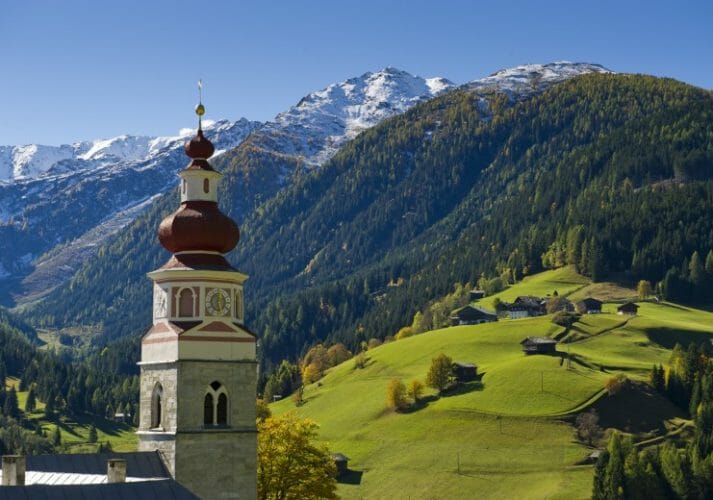 The Lesach Valley is located in the southwest of Carinthia. In adjacent East Tyrol, the uppermost continuation of the Gail river course is called Tilliach Valley. The lower eastern third of the Lesach Valley around the village of Sankt Jakob is part of the neighbouring Kötschach-Mauthen municipality.

The narrow valley borders the Lienz Dolomites range of the Gailtal Alps to the north and the Carnic Alps up to 2,780 m (9,120 ft) high Mt. Hohe Warte (Italian: Coglians) to the south, forming the border with Italy. Most settlements and paths are on the northern slopes over 300 m (980 ft) above the Gail River gorge.
The municipality of Lesachtal (area 19.62 km², pop. 1,665) comprises the cadastral communities of Kornat, Liesing, Maria Luggau, and Sankt Lorenzen im Lesachtal.

Innsbruck (2 hr 50 mins by car) Klagenfurt (2 hrs by car) Ljubljana Jože Pučnik Airport (2 hours 30 mins by car)
Obertilliach - Sea level Valley station: 1.434 m. Sea level Upper Station: 2.248 m. Lifts:1 Cable car, 4 drag lifts. Transport performance: ca. 5.000 persons / hour. Snowmaking Facilities: 50 Snow cannons, 2 Snow groomers. Slope space: ca. 55 ha = ca. 15 kilometres of slopes. Obertilliach Ski Area Kötschach-Mauthen - 1 two-man chairlift. 3 draglifts. 6 km of pistes (from easy to intermediate). 30 km of cross-country skiing trails – 1 snowsure high-altitude trail in Angerbachtal. 18 km of winter hiking trails. 28 m ice climbing tower as well as ice skating rink and curling rink Floodlit toboggan run at Gailberghöhe. Toboggan run at Plöckenpass. "Aquarena" water and spa oasis next to ski area. Children's area, children's ski school and children's ski lift. Large carparks next to ski lift and children's ski lift - Kötschach-Mauthen Ski Area
The Lesach Valley (derived from Slavic: Les, "forest") was inhabited by Slavs about 600 AD. In the 8th century it was one of the first valleys in the Principality of Carantania to be Germanised after Prince Boruth had acknowledged the overlordship of Duke Odilo of Bavaria about 740. In 1380, the Lesach circuit (Landgericht Lesach) was transferred to the lordship of Pittersberg, named after a nearby rock castle, then an administrative seat held by the East Tyrolean Meinhardiner Counts of Gorizia. After their branch died out in the male line, the last countess Margaret bequeathed the lordship to the reigning princes of the House of Habsburg in 1363. Later it fell to the Carinthian Counts of Ortenburg. With the creation of the Austrian municipalities (Ortsgemeinden) in 1850, the three municipalities Luggau, Sankt Lorenzen, and Liesing were constituted. The cadastral communities (Katastralgemeinden) Kornach and Strajach merged with the municipality of Mauthen, but in 1182 obtained independent status as the municipality of Unterlesach. Ten years later the two localities Birnbaum and Sankt Jakob became independent municipalities as well. Through Carinthian local government reform in 1973, the eastern Lesach municipality of Sankt Jakob merged with Kötschach-Mauthen, while the four western municipalities were merged into the present municipality of Lesachtal. During World War I the Italian front between the Austro-Hungarian Army and the Royal Italian Army was located on the ridge of the Carnic Alps. Many old positions and fortifications bear witness to the attritional mountain war from 1915 to 1918.