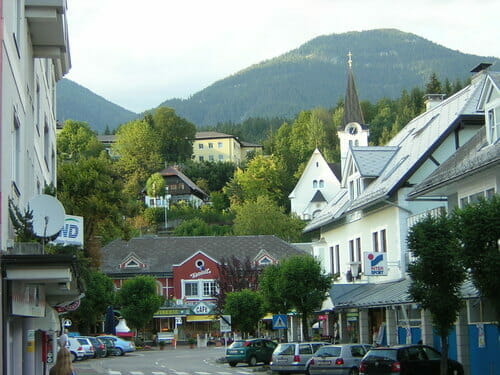 Hermagor town has a strong local culture and various festivals throughout the year. It is well served by a variety of supermarkets, shops and restaurants, bakeries and cake shops. The town is a municipal centre and has schools, doctors, vets, opticians and a small hospital. Close to the famous Nassfeld Ski Region, it attracts tourists all year round.

Hermagor town has a strong local culture and various festivals throughout the year. It is well served by a variety of supermarkets, shops and restaurants, bakeries and cake shops. The town is a municipal centre and has schools, doctors, vets, opticians and a small hospital. Close to the famous Nassfeld Ski Region, it attracts tourists all year round.
1hr 20 mins drive to Ljubljana Jože Pučnik Airport. 1 hr 40 mins drive to Trieste airport. 1 hr drive to Klagenfurt Airport. 2hrs 5 mins to Salzburg Airport.
15 mins to Weißbriach. 10 mins to Nassfeld Ski Region. 29 mins to Dreiländereck.
7 mins drive to Presseggersee – with sunbathing, swimming and restaurants. 25 mins drive to Weissensee – with sunbathing, swimming and walking. Many restaurants and tourist accommodation / campsites. Wörthersee, Ossiachersee and Faaker See can all be reached within 40 mins by car. Offering sunbathing, swimming and walking. Many restaurants and Shops and campsites and tourist accommodation.
The town of Hermagor has some 7,000 residents and is situated in the South of Carinthia (Kärnten), in the Gailtal Valley. It is a significant economic and administrative centre and was named after the first bishop of Aquileja, St. Hermagoras. Oldest records of a settlement near or at modern Hermagor date back to Celtic days. At this time, iron ore was mined in the area. In 15 BC, the Celtic kingdom of Noricum was incorporated into the Roman Empire. In 1169, the village was first mentioned in a written document. Situated by a crossing of two major roads, it soon developed into an important meeting point for traders. In 1288, Hermagor gained the privilege of holding regular markets. Through this market, Hermagor became the main town in the Gailtal valley. A mark in the history of the valley came in the 15th century, when Turkish troops invaded and devastated the Gailtal valley. Some Sightseeing in Hermagor In 1868, Hermagor became the county town of a district that was named after it. In terms of sightseeing, there are the obligatory market square, the parish church and a few pretty burgher houses. During the summer season, Hermagor is not a very touristy place - at least not by Carinthian standards. One of the main sights is the small palace of Schloss Lerchenhof. It was built in 1848 by a local nobleman named Julius Wodley just before his marriage. Unfortunately, the young man died before the building was completed. Nevertheless, it was finished and is now seen as one of the finest late neo-Classicist or Biedermeier buildings in all of Carinthia. Another building worth noting is the small palace of Schloss Möderndorf. It houses the town museum or "Gailtaler Heimatmuseum", where you can immerse yourself in local history of the Gailtal and Hermagor. Winters tend to be a bit busier in Hermagor, with the nearby skiing area of Nassfeld being the main attractant for tourists. Attractions of the Gailtal & Surroundings Attractions nearby are mostly of the rural kind (like the Lesachtal) - however, Millstatt, Spittal an der Drau and Seeboden are within relatively easy reach. Going north, you will get to the National Park Hohe Tauern with Heiligenblut and the Großglockner Hochalpenstraße as the most popular places. Lienz in Eastern Tyrol is also a very scenic city best accessed from Western Carinthia.